Cross-talk between skeletal muscle and placenta during pregnancy: Possible effects of exercise training

Document Type : Letter to the Editor

Dear Editor-in-Chief
During pregnancy, regular physical activity contributes to the health of the mother and fetus, which is due to the effect of exercise on the mother's physiological regulation, growth, and optimal function of the fetal placenta. But the mechanism of this effect is unknown. Recently, studies have shown that exercise can connect multiple tissues through the tissue secretomes. Muscle tissue secreting myokine can affect distant tissues such as the liver, adipose tissue, brain, skin, and even the placenta. However, other tissues can also affect muscle tissue. The human placenta as multifunctional organ releases large amounts of hormones, cytokines, placental proteins, non-coding RNAs, as well as extracellular vesicles into the mother's bloodstream (Adam et al., 2017). Exosomes are nanometer-sized extracellular vesicles produced by the endosomal pathway and packed with tissue-specific molecules. Because these nanoparticles can selectively target specific cells and transmit their contents to receptor cells, they form an integral pathway from cell-to-cell communication (Valadi et al., 2007). For example, exosomes secreted from the placenta reduce insulin sensitivity in muscle tissue and improve glucose metabolism in skeletal muscles during pregnancy (Nair et al., 2018). Since exercise itself is effective in improving insulin sensitivity, especially during pregnancy, it seems that one of the mechanisms involved could be the regulation of placental exosome secretion and its effect on muscle tissue, which has not been studied so far.
Evidence suggests that skeletal muscle during exercise by secreting endocrine factors such as myokines affect liver, adipose tissue, and placenta during pregnancy. Moreover, myokines can improve glucose and fat metabolism in mother’s body (Laurens, Bergouignan, & Moro, 2020).  So far, more than 600 myokines have been identified, the most important of which is irisin. This factor is secreted from muscle tissue and can affect the metabolism of other tissues, including white adipose tissue. It has also been reported that the level of this myokine can increase during pregnancy. The vital involvement of irisin in various key metabolic pathways increases attention to considering the effects of this myokine during pregnancy. Maternal circulating levels of irisin were measured in the range of 5-50 nM (Seven et al., 2019). In pregnant women during normal pregnancy, this factor is significantly higher than irisin levels in non-pregnant women. The potential role of circulation irisin on placenta is currently unknown. Since muscle contraction and exercise cause a significant increase in irisin expression (Sousa, Improta-Caria, & Souza, 2021), it seems that exercise during pregnancy with an increase in irisin also affects the placenta, which needs further investigation.
Recently, it was observed that maternal exercise stimulates the expression of myokine and adipokine apelin in addition to adipose tissue and skeletal muscle in human placenta. The new "exerkine" apelin appears to play a regulatory role in response to exercise during pregnancy in metabolic health (such as energy metabolism, fluid homeostasis, blood pressure, etc.) and fetal muscle development (Son et al., 2020). Furthermore, Bhattacharjee et al. in a current human study showed that regularly physically active women during pregnancy have a significantly increased placental expression of the myokine vascular endothelial growth factor (VEGF) and its VEGF receptor-1 compared to inactive women (Bhattacharjee et al., 2021). Further research is needed to assess the cross-talk between apelin and VEGF and the placenta in more details.
Fibroblast growth factor 21 (FGF21) is also a key regulator of endocrine and paracrine glucose and lipid metabolism, which is secreted from muscle tissue and can affect other tissues, including the placenta. FGF21 appears to affect the placenta through FGFRs and co-receptor β-klotho (Sun, Sherrier, & Li, 2021). Therefore, according to the evidence, it seems that the study of cross-talk subtypes of the endocrine family of FGFs (FGF19, FGF21, FGF23) and especially FGF21 with klotho protein along with the intervention of physical activity is a new topic to identify the mechanism. The effects of exercise on the human placenta need to be examined more closely (Bhattacharjee, Mohammad, & Adamo, 2021). 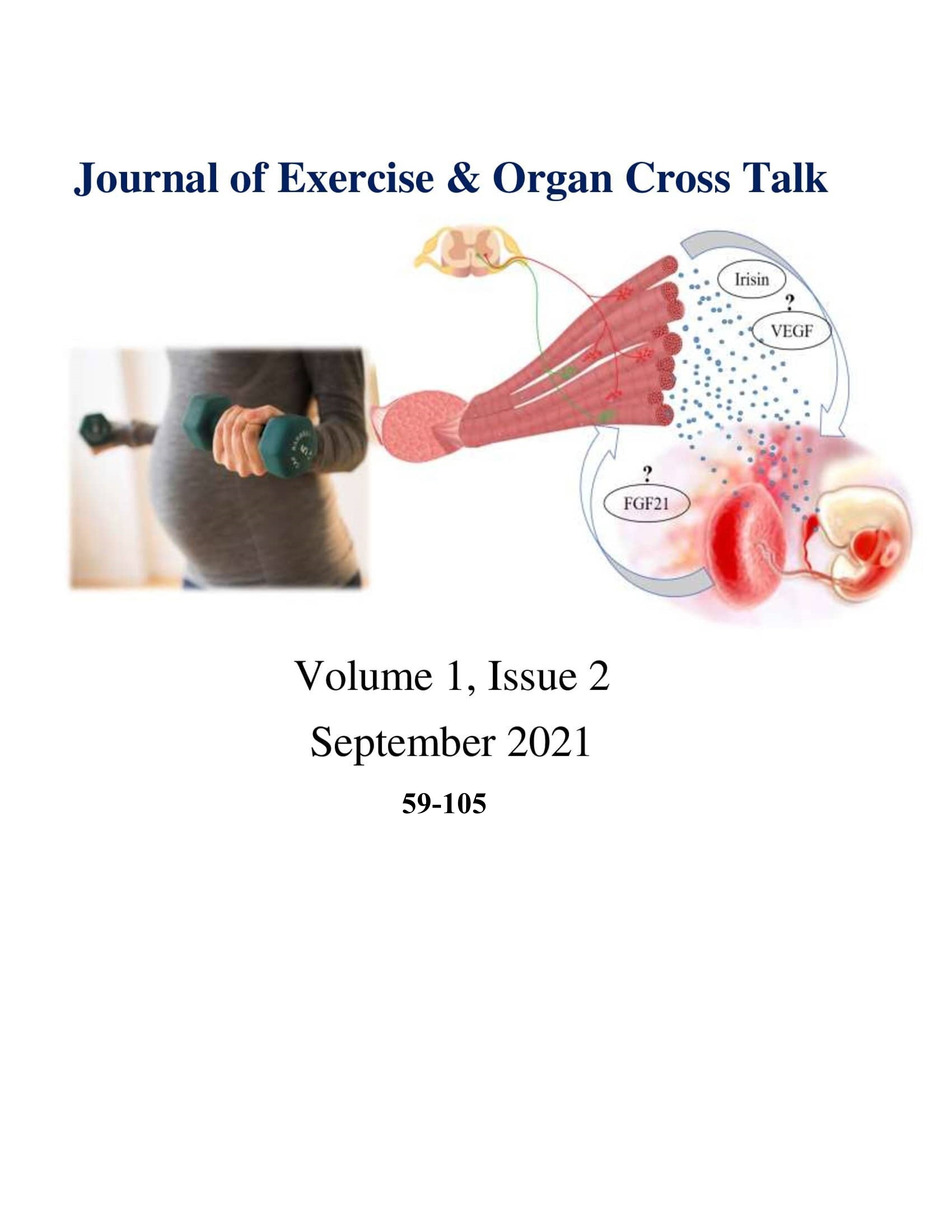